Holy One, may the meditations of all of our hearts be pleasing unto you and bring healing for all of us and for all the Earth. Amen.*

Mary’s words today – about how the lowly are lifted up and the hungry are filled with good things – are known as the song of Mary, because it is believed that she sung these words.

I found myself captured by her singing this week because her words are so needed in today’s society.   I need only turn on the news, or my computer, to hear songs that tell me why we shouldn’t trust each other, why we should hate our neighbors, why we should insult those who disagree with, why we should turn our pain into vengeance.

These songs are sung with a certain amount of certainty, as if the singers are the ones in control.  The songs tells us that if only we can do everything a certain way, then we will be safe, safe from pain, safe from violence, safe from each other.

All we need to do is wall up our hearts and our homes.

These are the songs I hear day after day.  These songs keep us imprisoned in fear, anxiety, and isolation.   The paralyzing nature of these songs is precisely why I am so grateful for Mary’s song because – in contrast – Mary sings a song of freedom.

Prior to the Scripture we read this morning, an angel appeared to Mary, telling her that she was favored and that she would deliver a child, Jesus, who would liberate the people.

Mary replies, “Let it be done with me according to your word.”

She says yes to God.

When Mary final arrives at Elizabeth’s house, she streams in and lets out a greeting.  We don’t know what kind of greeting it was — it could have been a cheerful hello or an anxious sob.

Either way, Mary finds herself standing before Elizabeth.

“What is she going to think me?”  Mary likely asks herself.

And yet, in hearing Mary’s greeting whether it was a grateful hello or a sobbing I-don’t-know-if-I-can do-this, Elizabeth gets it.  Elizabeth gets what Mary is going through.   She knows the fearful songs that Mary has been hearing because she has been wrestling with her own.

And in that moment, Elizabeth sees how clearly how much Mary is loved by God; she sees clearly how courageous Mary’s actions are, and suddenly the words come pouring out of Elizabeth’s mouth: “Blessed are you among women, and blessed is the fruit of your womb!”  She continues quickly on to say, “Blessed is she who believed that what our God said to her would be accomplished!”

“Blessed is she who believed.” 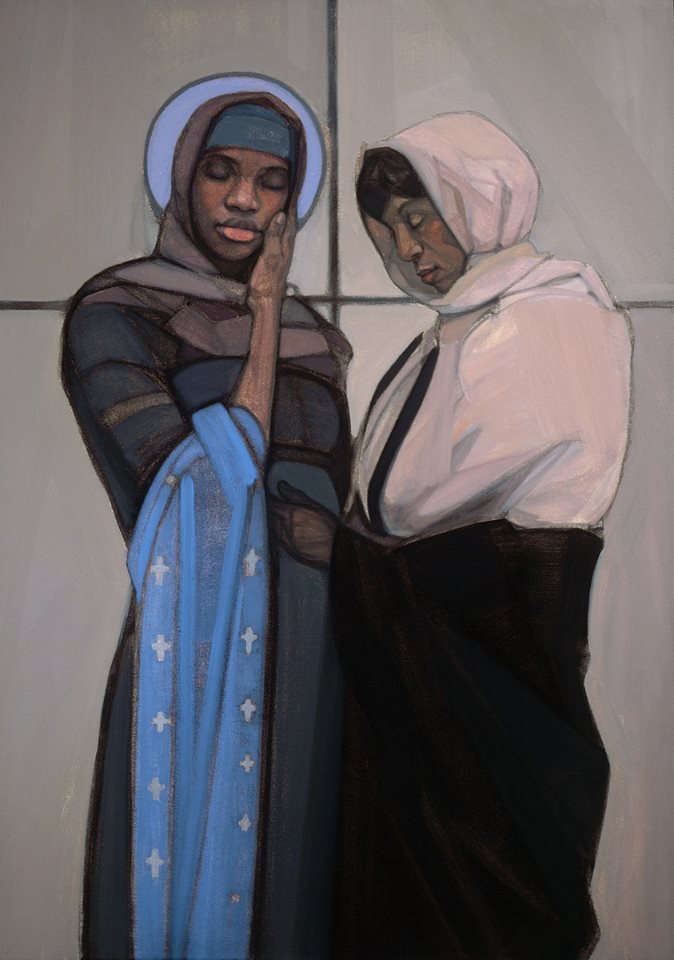 “Blessed.”  Those are not the words Mary had expected to hear.

Judgment, criticism, even confusion would have been an understandable reaction.

She was a young woman – pregnant and living in an occupied land.

Could she really be blessed?

Elizabeth’s words help Mary to see the transitory nature of all those songs that had been sung to her … ones with lyrics of fear and hatred and oppression.  These things, she sees, will pass away but what will remain forever is God’s goodness, God’s faithfulness, God’s love.

Then, spontaneously, a song bubbles up from deep within Mary–

a song of freedom.

“My soul proclaims your greatness, O God,” she sings out,

“and my spirit rejoices in you, my Savior.”

Suddenly, she is able to proclaim her own blessedness,

Which is not an easy task.

“From this day forward,” she shouts with defiance,

“All generations will call me blessed.”

“But it’s not just me,” Mary continues,

This, she sees is the true Song of life.

The hungry, the poor, the lowly, the broken hearted – all of us are blessed, all of us are made in the image of the Divine, loved beyond our wildest imaginations.

God is at work in all of our lives, in ways that we cannot imagine or comprehend.

Mary suddenly gets this.

In her singing, Mary celebrates how, even in her experience now, the powerful are brought down, the lowly are lifted up and “we are all on even ground, looking at each other face to face.  So that there is no more servant and served only people caring for each other and allowing each other to be cared for.” (Quote comes from Mustard Seed Musings).

Sure, those songs of fear and pain and self-doubt still ring in her ears,

but she has remembered the song of freedom,

and she carries it with her wherever she goes.

I can’t help but think that even after Jesus was born, Mary kept working on her song, kept singing and taught to Jesus and Joseph and all those who would listen.

I was listening to a song this week and the chorus said, “Won’t you help to sing these songs of freedom …. [these] redemption songs?”

This is the task to which Mary and Elizabeth invite us today.  They know how hard it can be to sing songs of freedom and they also know that the moment that it is the hardest is when we most need to sing.

What is our song of freedom and redemption?

How are we called like Mary to sing out this music?

How we called like Elizabeth to help others find their voice?

As I reflected on these questions this week, I found myself thinking about the time I was arrested for civil disobedience.  It was almost two years ago – I was working as a faith organizer in New York State around issues of economic justice.  The non-profit that I worked at as well as many other faith leaders and communities had been working hard advocating for a moral budget in our state and it was just not happening.

The people of faith in New York State had a vision of a fair NY and moral budget that prioritized the well-being of all New Yorkers, not just a few, and so they got together and decided to commit acts of civil disobedience in protest of what was happening.  Hundreds of people gathered to join them.  They packed the stairways, hallways and floors of the NYS capital.

I – along with a pastor that I knew from college named Sandy – came to the gathering to commit civil disobedience with the others.

The words continued to ring in my ears as my hands were bound and I was led away.

The lyrics spoke to me.  So often we think that we can’t make a difference, that our political situation is hopeless – and yet, here in the Capital, hundreds of people had gathered from all the corners of our state to sing their song of freedom. For those who had forgotten, for those who had not yet learned, for those who hadn’t known the words, they sang out and I joined them.  We sang out because we could see the vision God had in-store for us … because we knew the truth that our voice does matter … change is a-comin’ … because, even if they took us away with our hands bound, we knew the truth of Mary’s words that the rich and powerful will be made low and the lowly will be lifted up and God’s faithfulness, God’s justice, God’s love for all people will prevail.

“This little light of mine, I’m gonna let it shine.”

Won’t you help me sing these songs of freedom – these redemption songs?

This week, I heard the story of Archbishop Desmond Tutu, who when the struggle against racism and the apartheid was still uncertain in his country, preached to the country’s leader, “You may be powerful, indeed very powerful, but you are not God. You are ordinary mortals. God, the God whom we worship, cannot be mocked. You have already lost. We are inviting you to come and join the winning side!’”

Tutu’s words remind me that God’s song of peace, of justice, of love will be sung.  It cannot be held back.

Won’t you help me sing these songs of freedom – these redemption songs?

The Song of freedom is one that has been sung through the ages.

It is a song that became flesh and body in the form of Jesus.  Jesus, who calls people to open their hearts and break down their walls.  Jesus who eats with tax collectors and prostitutes, hangs out with the poor, unbinds us from our shackles and invites us to life abundant.

They thought they were in control.

The Song will be sung.

How will we respond?

Barbara Brown Taylor says that at some point, Mary stops singing the song and the song starts singing her. She becomes a conduit for life and love and liberation.

When we find our toes tapping,

what will we do next?  Will we let it happen to us?